Norwegian Airlines shares plunge on the Oslo Bource by 10% 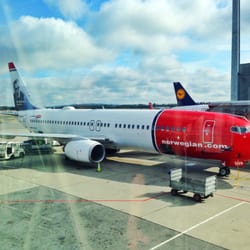 Norwegian (DY, Oslo Gardermoen) stock on the Oslo bourse plunged almost
10% in value on the opening of trading on Monday, September 4, following comments made by the Chief Executive Officer (CEO) of rival Ryanair (FR, Dublin Int'l), Michael O'Leary, about the Scandinavian LCC's future prospects. Comments attributed to the typically brash Irishman and carried by Travel Weekly said Norwegian faced bankruptcy in four to five months.“Both Monarch and Norwegian are in trouble," he said.

"It’s an open secret among airlines that Monarch Airlines (ZB, London Luton) and Norwegian may not survive through the winter. They are burning cash. Norwegian has huge aircraft orders that they don’t have the cash to pay for.”

Norwegian Communications Director Lasse Sandaker-Nielsen later told Norway's Nettavisen newspaper that O'Leary's comments “have no basis in reality.”    "All we have to say is that this is classic O'Leary bullshit that has no basis in reality," he said. "Norwegian has run a profitable business for 10 years and we will continue to focus on our own global business, not on single-player games as is done by our competitors."

Despite Sandaker-Nielsen's response, Norwegian's stock plummeted from NOK194.70 to NOK178.20 on the opening of trading on Monday morning. Prices later recovered to NOK194.40 at the close of trading.

Norwegian and Ryanair have been in talks to develop their vaunted connecting flights project. According to O'Leary, the negotiations are still ongoing.
Posted by Paul Dendle at 22:33